Young or Old, Communication and Relationships Are Still the Keys to Success in Roofing 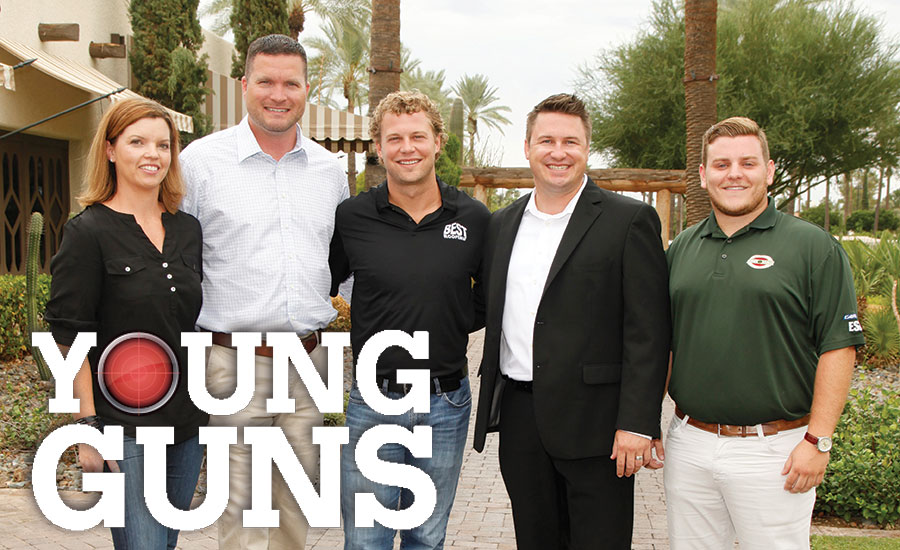 Despite widespread workforce concerns in the roofing industry that include a rapidly-aging core of roofing contractors, there’s a crop of young, dedicated individuals positioning themselves now to be leaders in the not-so-distant future. Roofing contractors in their 20s and 30s are more than just new faces in an established industry. The Roofing Contractor editors call them Young Guns, and we offer these brief introductions into who they are before they and their contemporaries change the roofing industry forever. In this installment of Young Guns, we feature up-and-coming roofing professionals that are already using their talents to help make their respective companies successful. They also put a premium on coaching and mentorship, and shared how important learning from the experiences of others shaped who they are.

Andrew Schmidt’s start in the roofing industry was hardly what one would call typical.

Shortly after high school, he enrolled at Belhaven University, a Christian liberal arts college in Jackson, Miss., where he studied classic theater. He spent roughly a decade pursuing an acting career and then turned his outgoing personality and strong presentation skills toward sales. After about a year as a sales manager for TMG Marketing, he ventured with business partners Tomas Wolfram and Jim Horning to revamp and rebrand Core Contractors Inc. in 2009.

The Denver-based business is growing rapidly in an increasingly competitive roofing market largely by investing in a relational marketing concept focused on creating partnerships that drive revenue through relationships. Schmidt said he quickly began to enjoy building a team and creating opportunities for people to invest in their own personal development and improve the quality of their lives.

His passion for people and business development drove the company to focus on the fundamental building blocks of purpose and cultural vibrancy. The staff now lives by the purpose statement of ‘Doing it Right Matters,’ and infuses this mindset into every aspect of the business.

“When we encounter a problem, we want our people to think about it and solve it by coming up with a solution,” he said. “The more we invested in our people, the more they referred their friends and family to be part of the company.”

The Denver community noticed too, awarding Core Contractors the 2014 Torch Award for Marketplace Ethics, sponsored by the Better Business Bureau.

“Look at the power of the purpose statement, because that’s what it was that made the difference,” he told attendees at Best of Success 2015.

JOHN SCALO JR.: THE NEXT GENERATION OF A FAMILY ROOFING INSTITUTION

Watch the interview with John Scalo Jr. here or on our Videos page!

Much like his father before him, John Scalo Jr. was told at a young age that he didn’t have to join the family business and become the third generation to take the reins of Burns & Scalo Roofing in Pittsburgh.

But as he spent summers working behind the scenes and developed his own future interests in business, he said he realized the great opportunity at his fingertips.

“As a kid, sometimes you feel pressured or forced into it, but (father and current President and CEO Jack Scalo) has always told me it was up to me,” Scalo Jr. said. “Yes, it’s pressure, but it’s also a great opportunity. How could you pass it up?”

And the younger Scalo didn’t. He worked at various roles for the company each summer beginning at age 13, and formally joined the company full-time upon graduating from West Virginia University with a degree in business administration and management in 2014. He worked as an operations manager and project engineer for nearly two years, and just last month, Scalo Jr. was promoted to project manager for both the company’s sheet metal and repair and maintenance divisions.

“I’m excited to lead multiple divisions,” he said. ”My goal is to work on increasing efficiency and driving the highest level of job performance.”

Though his father said he’s still far from ready to retire, creating a succession plan for John Jr. and building a strong team around him had been on his mind for years. He really started implementing the succession process within the past 18 months as his son became entrenched in multiple aspects of the business.

Though he’s appreciative of the experience he’s received in just a short time, John Jr. acknowledges none is as valuable as being side-by-side with his father and observing first-hand how an RC Contractor of the Year runs a multi-million dollar enterprise.

“I have the best teacher in the industry,” he said proudly. “He always has me involved in anything they’re doing and I’m seeing how he’s running meetings, closing deals and being a leader at industry events. I’m keeping my eyes wide open.”

Zack Wallick may not have officially started working at Best Roofing until 2009, but the story goes that he’s been in the roofing profession since he was old enough to climb a ladder.

After earning a degree in economics from Florida State University, he dabbled in academics as an admissions counselor before fully recognizing the potential upside of becoming a third-generation roofer.

“I’m not a sit-at-your-desk kind of guy. This truly runs in my blood and I’ve been doing this my whole life,” said Wallick, the eldest of company owner Gregg Wallick’s six children. “I don’t see myself doing anything else.”

But he still had to convince his father, who wanted to make sure he was ready to be the company’s future.

That meant Zack had to earn his own roofing license — a legal requirement in Florida, and had to spend more time in the field on a re-roofing crew. From there, he honed his measuring and estimating skills and took over as a sales manager, where his knack for marketing and people skills shined.

Now as vice president, Wallick said he’s hardly staying complacent and is gearing up to move the company forward. Largely in the commercial sector, Best Roofing is looking to diversify and grow its residential customer base by launching a new division. At the same time, he said he’s striving to change the image of the roofing industry in his own way by focusing on work ethic, trust, communication and follow through.

“I have a way of communicating with people and bonding with them to gain their trust,” said Wallick, 30, “I really believe that relationships are the key to being successful in this business and doing the things that allow for that bonding, rapport, and getting to know someone are really important.”

Even though the construction trades run deep in Bo Duggan’s heritage, he always wanted to be a pilot. And he was well on his way, earning a degree in aviation from Westminster College in Utah when the unexpected forced the airline industry into a tailspin and changed this country forever.

“I graduated and 11 days later watched the (World Trade Center) towers come down. The industry went in the tank,” he said. “I swore I was never going back into the roofing business …well, guess what?”

The fourth-generation builder moved his family back to Milwaukee and after years in roofing distribution, started America’s Best Remodeling in 2010. The company has since created a niche in storm restoration and uses software and other innovative tools to track leads, monitor production and manage growth effectively.

“Once I hit my first storm, I knew it was off to the races,” he said. “We started to grow, and almost grew ourselves to death a handful of times, learning that you don’t know what you don’t know.”

Along for the ride is Duggan’s wife and business partner, Tara. She saw first-hand the dedication and work ethic needed to balance family life and business from her entrepreneurial parents. She got into marketing after graduating college and went back to Marquette University for an MBA. She was directing marketing programs and strategies for corporate law firms when Bo decided to venture out on his own, and officially joined him in the office shortly after the birth of their second child.

“Once I got a taste of it, I knew it was time to leave my law firm,” she notes on the company’s website. “It’s a great challenge — and a lot of fun — for me to work with my husband every day to grow this company.”

Their business partnership goes beyond just roofing. They also run an excavating company in Iowa with about 22 employees; own and manage real estate properties; and have aviation interests that deal with chartering and brokering.

Advantages of a Multi-Skilled Crew